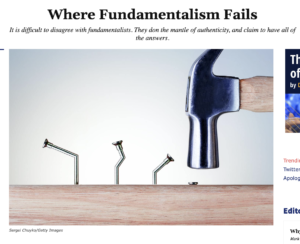 I know. I know. You’re worried, “Here we go again. This is gonna be another variation of the Thinker post. And Shawn is going to make his name taking down those who speak ill of Karaites.” Don’t worry – it’s not and I won’t.

Last Friday, I got a “Karaite” Google Alert. I was pumped. I love it when we get press. I clicked on the alert and sighed as soon as the I read the title of the article: “Where Fundamental Fails: It is difficult to disagree with fundamentalists. They don the mantle of authenticity, and claim to have all of the answers.” 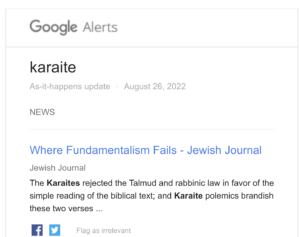 You can probably guess where this is going: Karaites are fundamentalists . . . they get so many things wrong by reading the Torah without the Oral Law . . . they don’t light shabbat candles . . . yada yada yada . . . they live a soulless life.

In case you are wondering: yes, I did yada yada yada over the best part (that Karaites don’t have sex on shabbat).

While Rabbi Chaim Steinmetz fundamentally doesn’t understand Karaism, his post was not snarky. But he did attempt – just like the Thinker did – to use Karaites to manipulate you (or at least other Orthodox Jews).

Why Rabbi Steinmetz is invoking Karaites to begin with:

In a published lecture, Rav Yehuda Amital decried the fixation on Halakha in the religious Zionist community. He says that “just as Judaism fights against the Karaite relationship to the written Torah … So too it needs to fight against the Karaism of Halakha. Halakha without an interpretation of reality is a form of Karaism.” Rabbi Amital sees this “Karaite-like” approach as a reason for disaffection in the Orthodox community: “This Karaite approach has brought us to the point that Halakha has turned into, in the eyes of the younger members of our community, an (absurdly detached method) that has no connection to reality … This is why we hear today from young religious people that: ‘the Torah doesn’t connect to us,’ is ‘not something realistic’ and ‘not my thing.’”

I’m not even sure what this really means or why it has anything to do with Karaites. If I were sincere in trying to convince someone of my opinion, I wouldn’t introduce the bogeyman into it. I would not reduce another population to a rhetorical device, and I certainly would not paint (by analogy) another group of people as having no connection to reality. But you do you, Rabbi Steinmetz.

(To be clear, Rabbi Steinmetz approached Karaites with far more dignity than other people have. Heck – he even quotes H. Yefet Ben ‘Ali. That’s some cool stuff.)

Will the Real Fundamentalists Please Stand Up:

But there is another element at play as well; to borrow a term from the contemporary study of religion, the Karaites were fundamentalists. They were returning to the biblical text in search of authentic religion.

First, get it right. Karaites *are* not *were* [Fill in the Blank]. We are still here.

I like that one a lot, but it is missing a call to action.

Here is what Rabbi Steinmetz wrote about Karaites

Because they rejected the rabbinic tradition, Karaite practices diverged in significant ways. They were more lenient than rabbinic Judaism in some ways: no tefillin, no prohibition of mixing milk and meat, no shofar, no mikvah. But in many ways their practices were far more extreme. They did not use any fire on Shabbat, did not have sexual relations on Shabbat, didn’t eat anything fermented, including wine and yogurt, on Pesach, and early Karaites did not eat meat in mourning for the destruction of the Temple. Most significantly, the Karaites rejected the precalculated calendar of the rabbinic community. Instead, new moons were declared by visual observation, and early Karaites declared leap years based on observing whether the barley crop had nearly reached maturity before the month of Nissan. This meant that Karaites often observed holidays on different days than Rabbanites.

I could comment every word of this – but it wouldn’t accomplish anything. Instead, I’d just want to add that the fundamental principle of Karaite Judaism is to search the scripture well and not rely on anyone’s opinion. But Rabbi Steinmetz doesn’t mention this because he needs to paint Karaites as either too permissive (MILK AND MEAT!!!) or too extreme (NO YOGURT ON PESACH!!!). He doesn’t want you to focus on the fundamental truth about karaism: that each and every Karaite has the responsibility to interpret the commandments for herself. (Yes, I said herself, because women have that power too! How is that for fundamentalism?!)

Okay, at the risk of not accomplishing anything:

A Plea and an Invitation:
Dear Rabbanites, please do not reduce Karaites to a rhetorical device in your intra-Rabbanite debates and struggles. If you’d like to talk to an actual Karaite, you can reach me at shawn@abluethread.com.

5 Responses to Rabbi Chaim Steinmetz has a Fundamental Problem