I walked into the synagogue a bit late yesterday morning. After saying Shabbat Shalom to my parents, the first thing I did was find my Uncle Joe Pessah – the former acting rabbi of the Karaite Jews of America. I said, “Are we reading Kelil Yofi today?” He said, “You’re favorite! Yes it is coming soon.” I then made my way over to the bima to get the hazzan’s attention to let him know that I’d read Kelil Yofi. It never really occurred to me that Kelil Yofi was my favorite piyyut (liturgical poem), but I think it undoubtedly is.

In reflecting on *why* it is my favorite piyyut, I realized something important about Jewish learning.

My love affair with the Kelil Yofi started several years ago (in 2017) when the Karaite synagogue was under construction and we were praying in a small room at Peninsula Sinai, a conservative (Rabbanite) synagogue in Foster City. I was flipping through the humash and found a poem I had never really paid attention to before.

At first, the only two things I noticed about the poem at that time were the acrostic, which read Caleb Hazzak (“Caleb, be Strong”) and that it was written by the Karaite Sage Caleb Afendopolo. Below, I’ve copied and pasted a printing of Kelil Yofi and I have highlighted the acrostic and the attribution to Caleb Afendopolo. 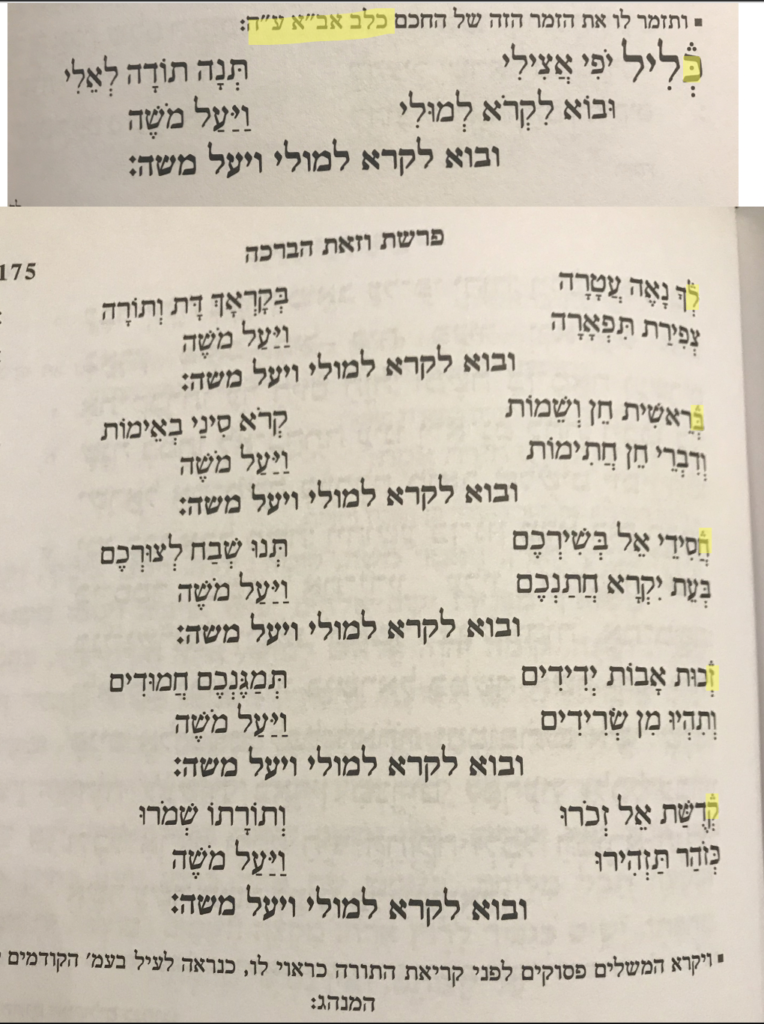 Then I looked at the poem closer and saw something really cool in the third stanza. The poet inserted into the poem a reference to each of the five books of Moses. Just so you know – at the time I noticed the reference to names of the books of the Torah – I was incredibly proud of this discovery. It was probably the first time I had looked at a piyyut and noticed something like this on my own. Of course, this wasn’t a discovery in the scholarly sense. This was discovery in the “Wow, I’m beginning to figure out different elements of Hebrew poetry” sense. This was a really cool moment for me personally. 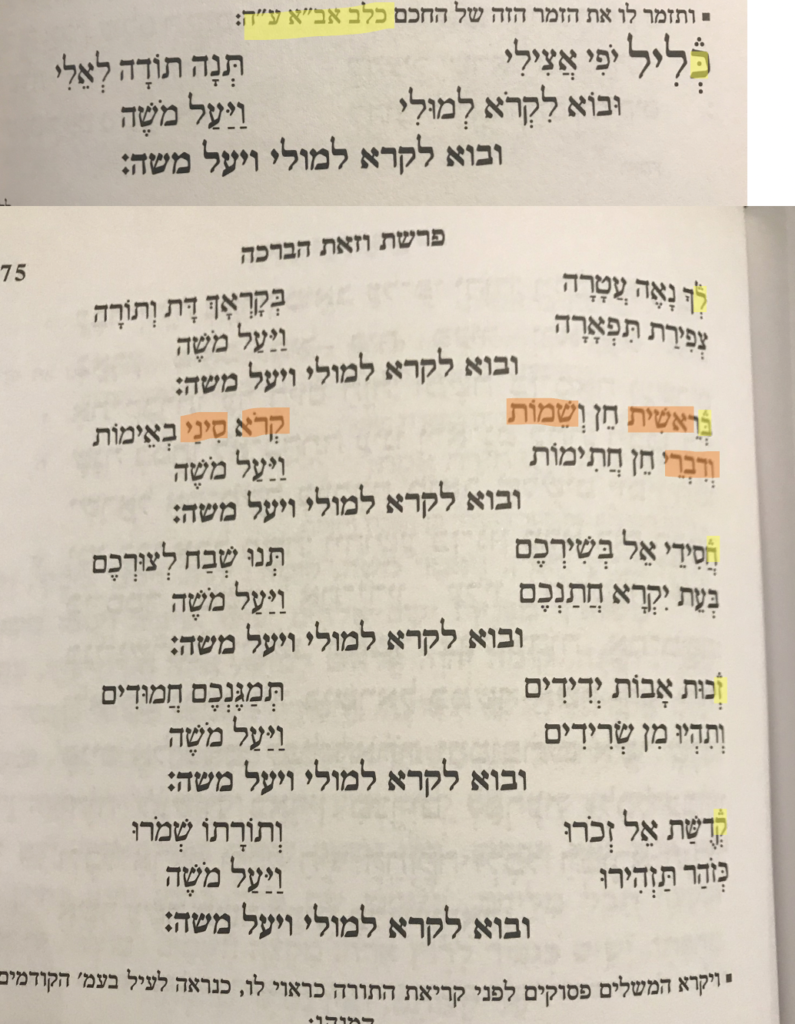 That was about all I remembered from the poem after that day. I didn’t remember what page it was on, or which book it was in, or when it was read. I didn’t remember anything other than that it was by Caleb Afendopolo and it had the names of the books of the Torah in it.

About a year later, I had a desire to figure out which poem this was – for, I had never seen it again.  So I asked my Uncle Joe (yes, the same one mentioned above) whether he knew of a poem that had all the five names of the books hidden in it. He was stumped. But then I said, “I am pretty sure the song has the words ‘Kelil Yofi’ in it.” His eyes lit up, “Ah, Kelil Yofi. Very important song. And he sang the opening words to it.”

Shortly thereafter, I received a recording of the song from Hazzan Rotem Cohen. I’ve linked that recording below.

Now that I had a recording, I was desperate to know what the song meant. Thankfully, Gabriel Wasserman had put me in touch with a friend of his Sara Friedman who could the translate the poem for me. And I am so glad she did. There was so much about the poem that I never would have understood.

Let me give you a run down of the hits:

I had someone add music to the Rotem’s Recording and we put it online about a year ago.

You can download the words and translation here: Kelil Yofi – for Distribution.

All of this made me reflect why this had become my favorite piyyut. There are many factors but among them was the fact that I discovered some of the poem’s charm for myself. I assume this is how many people fall in love with a piece of literature or any subject. Perhaps the self- discovery process is a critical aspect of learning and we need to harness it more in order to bring people closer to Judaism. I’m sure lifelong teachers knew this (or some version of this) – that is why they give us opportunities to discover things on our own. While we are on the topic – please increase teacher salaries.

I also observed something else about Jewish learning. Before I recited Kelil Yofi yesterday, I explained to the congregation much of the context of the poem and its structure that I provided for you here. Then during the recital – I assigned a few people to read a verse of the poem. I did the first two verses and assigned others to recite the remaining verse. Attendees were so moved by the poem and the explanation that there were so many people who wanted recite a verse; so we recited some of the verses more than once. The Hatan Torah himself even recited one of the verses.

So, give it a chance for yourself – here is Yedidi Sim Sevara, which is recited before the first aliya of the year. See if you can find any of the themes we’ve just discussed with Kelil Yofi.

2 Responses to How Kelil Yofi Became My Favorite Poem