Yes; I Do Keep Real Kosher (And Other Struggles of Modern Karaites) 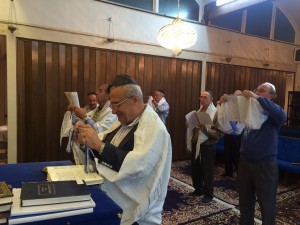 Recently someone asked me to start posting about the modern Karaite Jewish experience again. You see, the Karaite Jewish experience was the crux of my blog in its early days. For many reasons, I’ve moved away from this – in favor of commenting on news, historical events, and highlighting where Karaite views are different from our Rabbanite brethren or have evolved over time.

But the modern Karaite Jewish struggle is real; and I am here to give a voice to that struggle. So here is a smattering of the things that people have said to my face in the past few months (and a proposed response, in case anyone says the same to you). I should note that most of the time, these comments are not made out of malice. But nonetheless, they sting.

I hear this all the time when I tell people that I don’t separate milk and meat. In fact, as far as I can tell, none of the early Karaites enforced any separation of milk and meat, except when it was the case with respect to the milk of a mother and the meat of the child. (More on the various Karaite views on milk and meat in a later post – I hope.)

I’m kidding. And I even hesitate to leave that on my blog. So, to be clear, I don’t condone violence.

This statement usually follows any discussion in which I say that Karaites only keep one day for each of the holidays (even in the diaspora). For background, in the Orthodox community, each Torah holiday (except Yom Kippur) is celebrated with an extra day. So for Karaites (like the Reform position), Passover is seven days, where as our Orthodox brethren observe it for eight days.

This is a classic line that I hear almost any time I describe how Karaites pray. For the uninitiated Karaites historically have prayed with full prostration on prayer rugs, without our shoes. This does indeed look like how our Muslim cousins pray.

You can also respond with some form of the “pre-existing paradigm” answer from above.

4. How Can You Ignore the Rulings of the Sages?

This query usually comes from religious Rabbanites. I very rarely hear it from anyone else. In truth, I used to hear this a lot more. Perhaps society is loosening up, or religious Rabbanites have their own battles to fight within their communities, so they are leaving me alone.

That should do it for now. I invite you to comment with some of the criticisms (founded or not) you have heard leveled at you for your Karaite tendencies.

Filed under Kashrut, Milk and Meat, Prayer, Rabbanite Privilege, What is Karaite Judaism

82 Responses to Yes; I Do Keep Real Kosher (And Other Struggles of Modern Karaites)