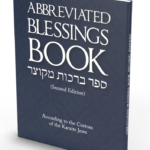 Where I first Learned Yah Zimrati

I hated Yah Zimrati the first time I tried to learn the melody. I really did. It was about a 8 years ago, and the Karaite Jews of America was hosting a Shabbaton. If I recall correctly, it was the same weekend we announced to everyone that we’d be remodeling our synagogue. We had about 20 people in from out of town and we were extremely blessed to have Gal Shemuel visit us from Southern California. We were blessed until he tried to teach us the melody for Yah Zimrati.

It was the most difficult and complicated melody I’d ever heard. Repeating words and repeating lines and all this other melodic stuff that I still cannot wrap my head around. I fondly recall asking us to teach us Yah Zimrati because it was in the Blessing Book that Neria Haroeh had put together, and I didn’t know the melody. He taught us the melody and my head instantly wanted to explode. I then asked him to teach us another song, Matok Devar Torah, which was also in the blessings book, and I said, “It better not be nearly as complicated as Yah Zimrati.”

Here is the song to help orient you:

In time, I grew to love the song (almost entirely due to the above recording).

In fact, during the early part of the pandemic, I would put my children on my knees and sing Yah Zimrati and go absolutely wild when we hit the third line of the chorus (“YOM HASHABBAT SHIMRU SHIMRU LACHEM!”). My son still asks me to do this with him. And it was the first song I learned to play on the Oud (also during the pandemic). I remember playing the first two notes and my daughter said “Yah Yah. Daddy’s playing Yah Yah on the Oud.” And my daughter absolutely loves Yovel Musa’s voice in the final stanza.

As much joy as the song has given me, we sadly, we don’t know who wrote the song. And The Karaite Press is offering a bounty of $1,000 (subject to any applicable taxes) to the first person who proves to me (in my sole discretion) who wrote the poem. Offer expires June 27, 2023. You have to allow me to publish your findings in any media whatsoever (podcast, blog, book, article, website, magazine, etc.).

We can assume with a high level of certainty it was written by someone named Yehudah, because the acrostic reads “Yehudah”. We know that it was in the first printed Karaite siddur – the Venice Siddur – so the person who wrote the song lived no later than 1528. Here is what we wrote about it in our upcoming book on Karaite songs. (This book won’t be available for a few months – may November, and there is still a little time for me to update it if we find the name of the author soon.) 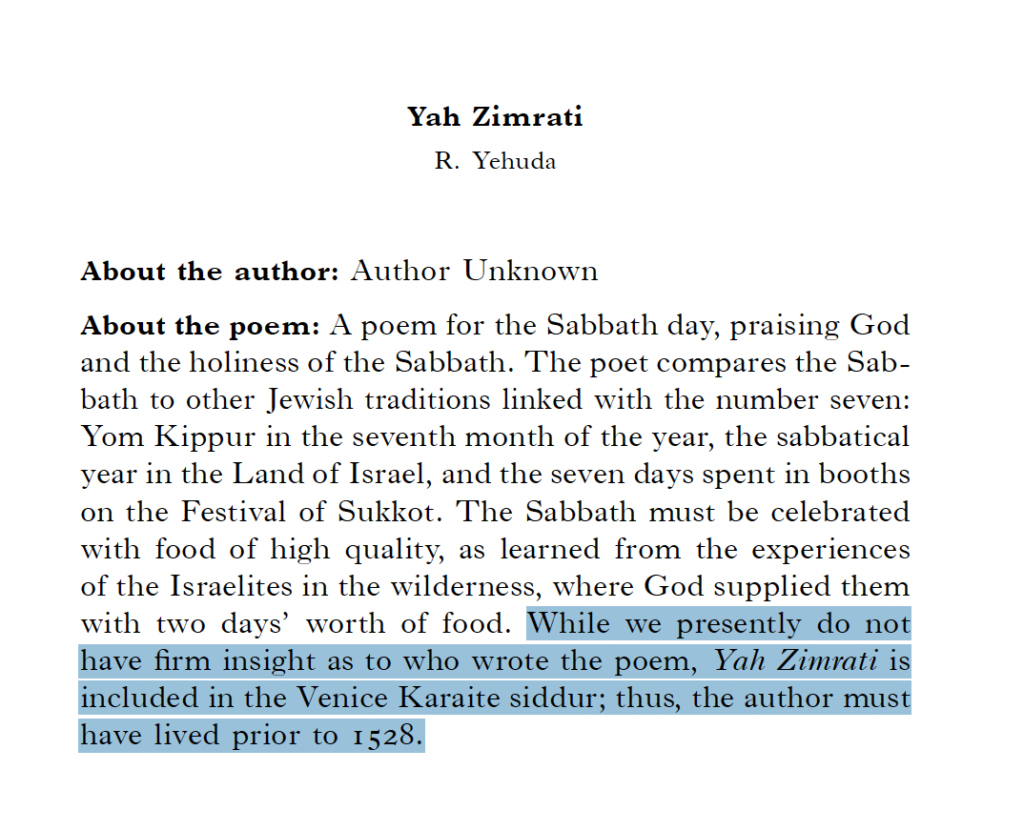 My theory is that the poem was written by Yehudah Gibbor, a Karaite with strong Kabbalistic tendencies who was born around 1460. The theory is appealing to me because we know that a large part of Yehudah Gibbor’s works were published in the Venice Siddur and has been carried over to the Vilna Siddur (1891) (See Minhat Yehuda, Vilna Volume I, page 342).

So have at it Manuscript Hunters. Do your thing.

Here is how to play it on the Oud:

I also want to thank and acknowledge Henry Mourad for encouraging me after I did the post regarding the last bounty. He thought it was a great idea and encouraged me to do more.

One Response to $1000 Bounty: Prove who wrote Yah Zimrati