$500 Bounty: Prove whether Ronnu Shamayim was written by a Karaite or Rabbanite 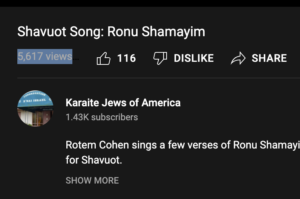 I’ve had enough guessing, enough speculation and enough supposition. I want someone – ANYONE – to bring me definitive proof of whether Elyakim, the author of Ronnu Shamayim, was a Karaite or Rabbanite. And I’m putting up a $500 bounty  (or rather The Karaite Press is). We know with certainty that Ronnu Shamayim is probably the greatest Shavuot melody of all time. Now we need to know who wrote the poem.

So here is what I understand to be the current situation:

So what does all this mean:

By June 7, 2023, be the first person to bring me definitive proof whether Elyakim was a Karaite or a Rabbanite and agree to allow me (and the Karaite Jews of America) to publish your findings in any media whatsoever (podcast, blog, book, article, website, magazine, etc.) and you will receive the $500 reward (subject to any taxes).

Updates: I want to make clear what I already know:

BTW, here is a recording of Ronnu Shamayim:

And here it is with explanation and translation:

And here is a pure instrumental (at about the 40 second mark it a bunch of other instruments join in):

As mentioned above, there is another – clearly Rabbanite – poem attributed to some Elyakim or other that appears in Karaite texts. It is a havdala poem called Et Kos Yeshuot, and here is a recording:

Finally, here E’rog Bechol Libbi, a for Shavuot – by a Karaite, with the historical Karaite melody for it:

And here E’rog Bechol Libbi redone to the melody of the famous Rabbanite song Bizkhut Hemdat Levavi, and this melody is also used (though, less often) for the (Rabbanite) Havdala song Hammavdil ben Kodesh:

One Response to $500 Bounty: Prove whether Ronnu Shamayim was written by a Karaite or Rabbanite