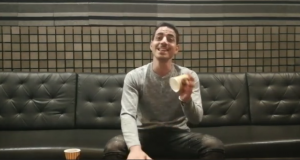 Cups . . . the gift that keeps giving

By now, most of you have seen the Rotem Cohen Cups video that the Karaite Jews of America has posted on its Facebook page and website. Today, I share with you some of the background of the video and let you know that a lot more is coming your way.

First, for those of you who have not seen it, here is the Cups video, in which Rotem sings Yatzar Ha’El to the famous Cups tune.

Second, let me answer the most important question for you. The *other* cup in the video is *not* for Eliyahu Ha-Navi. It has Rotem’s coffee in it and Rotem proudly took a sip (it seems) right after the video cuts off.

Now, let me tell you why all this matters. One of the most beautiful aspects of Erev Shabbat is sitting around after a meal and singing shabbat songs and when we are blessed to have a new bride and groom in our presence the beauty is amplified by being able to sing songs in their honor.

To be frank, this is an aspect that American Karaite Jews miss out on. There are many reasons for this – to name a few: (i) Shabbat singing tends to exist in religious circles and most American Karaites are less religious than the average family or community that sings; and (ii) we don’t have great recordings of many our songs; (iii) we don’t have an English friendly bencher / birkon (i.e., those awesome little books that people sing from).

As you know Priel and Nir have been working miracles here in Daly City bringing people closer to our Creator, and importantly they are helping people sing more. So, I think the time is right to announce that I have been working on an initiative to change items (ii) and (iii) in that list above.

I teamed up with Dr. Riikka Tuori, lecturer of Middle Eastern Studies at the University of Helsinki. Dr. Tuori’s Ph.D. was in Karaite poetry and she is probably the foremost expert on the piyyutim in the Karaite siddur from Vilna. Not only that, she has helped The Karaite Press with the biographies of two of the authors whose works we have published: Solomon ben Aaron (author of The Palanquin) and Mordecai ben Nisan (author of Royal Attire). This makes her the perfect person to team up with to create biographies of the poets whose songs we have included in the work and also to translate the songs.

Of course, the other natural group to team up with is the Karaite community of Israel. We are blessed that a group of men and women will be doing professional recordings of these songs. Among the singers doing the recording are the two women (Yovel Musa and Miriam Kefeli) who lent their voice this beautiful rendition of Yatzar Ha’El (the same song that Rotem did in the above video) and to Matok Devar Torah (a song of Rabbanite origin). As we get closer to finalizing the project, I will make sure to do a post with the entire corpus of songs and acknowledging everyone who worked on it.

But the part that I am most excited about is how “inclusive” the song selection is. In short, I really tried not to impose my own values on selection of songs. So the same birkon that has Shabbat Menuha, a song whose opening line states that the Sabbath is a day of rest and day of light (Shabbat Menuha Ve’Ora), also contains Yerivai Ve’Oyevai, a song that addresses the author’s adversaries and proudly proclaims the author’s resistance to lighting shabbat flames. Of course, it is possible that the light in Shabbat Menuha is spiritual light (and without knowing more about the author’s views it is impossible to state with certainty).

Because Shabbat Menuha is a song that is sung to this day in Karaite communities and has a traditional melody, I asked Rotem to compose a new melody to the tune of Leonard Cohen’s Hallelujah. You can hear this new rendition below and get the lyrics here.

And because Yerivai Ve’Oyevai is not sung in any Karaite communities today and was not even included in the Vilna Siddur (and was likely not even known the compilers of the siddur), Rotem wanted to create a more traditional melody for it. You can hear this rendition below and get the lyrics here.

A few more notes before I let you go for now:

That’s about it, I pray this is all available to you in January 2020.