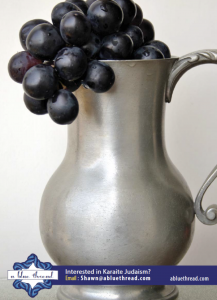 I don’t know whether this is coincidental or not, but the origins of the modern Karaite movement are mostly in the areas now called Iran and Iraq. And the Ethiopian Jews had a similar custom. Regardless of who is “right” with respect to the dietary laws of Passover, I am saddened that the convergence of all these non-Karaite communities in Israel and in the U.S. will almost inevitably lead to a loss of this particular practice. That is, it is much simpler to adopt the majority Jewish customs, especially where a practice (such as rabbinic community’s refraining from certain fermented food) is not codified in the Rabbinic halakha.

Without further ado, here are some resources for Rabbanites (and Karaites) that I hope will stimulate conversation this Passover season.

Breaking News: My father was not a wandering Aramaean (and Neither was Yours) 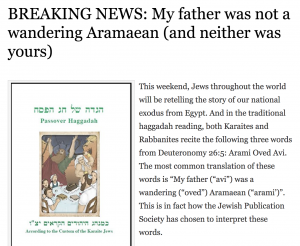 This post first went live in 2016 and it was an instant classic. I still cite the research here at various talks (including the talk I just gave in Sacramento). It discusses the meaning of Arami Oved Avi, usually translated as “My father was a wandering Aramaean”, which both Karaites and Rabbanites recite during the haggadah reading.

Should Jews stop “Wining” on Passover? 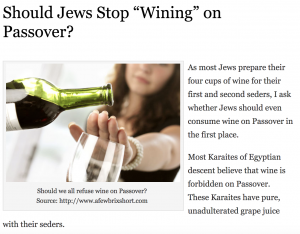 Here, I discuss whether all fermented foods should be forbidden on Passover.

For those who want a more detailed discussion on the Karaite views of fermented food on Passover, check out Tomer Mangoubi’s Mikdash Me’at.

And this video is just silliness. I miss learning with those kids . . . who are no longer kids.

Here is a great song for Passover. I myself did not know this song until a few weeks ago.

4 Responses to A Karaite Passover Resource Guide – For Rabbanites