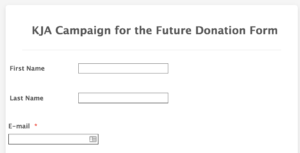 I can’t believe it’s been over 10 years since I started A Blue Thread. In that time, millions and millions (as The Rock would say) of people have read my posts. Okay, that’s not true. But still, shout out to The Rock. What is true is that in that time, so many of my Karaite dreams have come true.

Today, I am issuing a challenge: I am hoping to get 500 people to donate to any of the following causes sponsored by the Karaite Jews of America: The Karaite Press; The KJA’s Campaign for the Future; or The KJA’s Needy Fund.

This isn’t a goal to raise a certain amount of money (really: donate $10, $42, $72 dollars – any amount is great). Instead, I want the most amount of people possible donating money. So I am setting my goal this year at a modest 500 people between now and April 2.

(If you feel inclined, in addition to donating, please share this post with your family and friends asking them to support our work as well.)

Before you go, if you are looking for a symbolic number to donate, might I suggest $42 (which is the official number of Karaite giving). Or $72 in honor of my Uncle Amin (actually, first cousin once removed) who turns $72 on March 23 – the day of our launch party for our site. If you like the concept of giving in increments of $18, I’ll note that $72 is quadruple 18.

But really, any number is great.