Reader Poll: Vote on an Official Number for Karaite Gifting 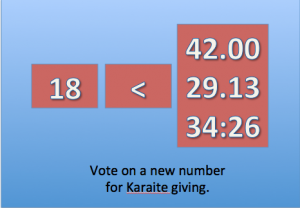 Many Karaites (especially those like me who had a great Karaite awakening in life) feel some discomfort with the number 18. Don’t get me wrong: we don’t lose sleep over it; but we definitely wonder whether Karaites can find a different number to associate with gifting. To-date, the most common number of Jewish gifting remains $18 (and multiples thereof), because in the gematria, $18 represents life. It also represents a whole bunch of other things, but let’s not mention those.

Since Karaites tend to avoid gematria for mystical purposes, I thought our online community can vote for an official number or Karaite gifting.

First, an anecdote. About 10 years ago, Eliezer ben Efraim (who helped found the Karaite Jewish University) and I were walking around Daly City. He said that we need a number other than 18, and he suggested 24. He said that any self-respecting San Franciscan would know that Willie Mays wore 24 and would be honored to donate to the Karaite Jews of America in a number representing Willie Mays.

Not a bad thought. This week, I checked the gematria of 24 and it turns out it represents trust/security. Again not bad. But it also represents “slimy” and “oppressed.” Eh. I think we can do better all the way around. (And I hope this analysis shows you the problems with any gematria or hidden meanings.)

So, I started thinking about how I would come up with an official number for Karaite gifting. I really only had a few rules:

So, here are my suggestions:

Remember, there are many Karaite causes out there that could use your support. In addition to voting, I humbly ask that you make a donation (in any amount) to the Karaite causes of your choice or make a purchase to support Karaitica. Some suggestions: The Karaite Jews of America; Nehemia Gordon’s Makor Hebrew Foundation; Purchasing a book (not tax deductible) from The Karaite Press. Of course, feel free to donate to and support others. [**]

* I only am providing the numbers of famous baseball players as fun tie-in to the original conversation I had with Eliezer. I do not intend to convey that any number would harness any supernatural abilities from the association with these players. Plus, the World Baseball Classic just concluded.

** Disclaimer: none of these organizations have asked me to suggest their names, and I do not receive any compensation for mentioning them or for any donations/purchases.

8 Responses to Reader Poll: Vote on an Official Number for Karaite Gifting