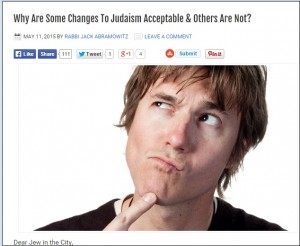 Let me first start by saying that the Jewish world is too small for us to be acrimoniously divided. We don’t have to agree on everything (or on anything for that matter); but wherever humanly possible, we can welcome all Jews into our tent. That’s why I’m a bit perplexed by Rabbi Abramowitz’s views as to who is the tent and who is left out in the cold.

For context, here is the question that the Rabbi was asked:

And here is his response with respect to Karaites:

While these events show (at least to me) that the Jewish tent is filled with Karaites and Rabbanites, they also suggest that our differences are only as big as we perceive them. As Bob Marley sang, “Emancipate yourself from mental slavery; none but ourselves can free our minds.”

There is no historical or even philosophical reason that the Jewish tent cannot include both Karaites and Rabbanites. The only reason to exclude a historically Jewish movement from your tent would be if you thought your tent could not withstand open and honest discussion about the Torah and how it applies to our lives. That is, you would only exclude Karaites or Rabbanites or Essenes or Pharisees or Sadducees if you think your tent is not strong enough to weather the ensuing debates.

Rabbi, you may reach me at Shawn@abluethread.com

[1.]  Here is a short explanation of the origins of this tradition.

[2.] As you might presume, I deny the premise of the question. I don’t think that Karaite Judaism “changed” anything. Rather, Karaite Judaism and Rabbanite Judaism both arose in response to a change in the Jewish world: the destruction of the Temple and the fall of the priesthood.  This is a topic for another day, though.

[3.] He states, “Orthodox Judaism is a bigger tent than most people think.” This might suggest that he is only talking about the Orthodox Jewish tent. But he then continues, “There’s more than one way to look at things and more than one way to get things done. I was raised reform but it never spoke to me.” Reform is clearly outside the “Orthodox” tent – but Rabbi Abramowitz does not state that they are outside the tent. This leads me (and many others) to understand that he is talking about who is in the Jewish tent in general. Interestingly, many reform Jews deny the Oral Law (and even the divinity of the written law).