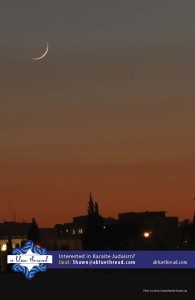 Some of my hesitancy is admitting that I was in fact wrong is because so much of my identity has been wrapped up in this.

When I was in fourth grade (iirc), I showed up to school on the Rabbanite Yom Kippur with a handwritten note from my mom explaining that I would be absent the following day for my religious observance. In that year, the new moon was seen in Israel one day after the Rabbinic calendar set the new month. And that year was the last year the Karaite Jews of America set their holidays in accordance to the new moon sightings in Israel.

In law school, I eagerly awaited news of new moon sightings from the Land of Israel (as disseminated by the Karaite Korner, and others) and often fasted for Yom Kippur or observed Passover (Hag Hamatzot) on different days from my Rabbinic brethren – and even from my Karaite brethren in the U.S. who were observing most holidays in accordance with the Rabbinic calendar.

According to everyone I’ve spoken to, the adherence to the local moon also seems to have been the majority position of the Karaite sages of the Middle Ages. And my guess is that Daniel al-Kumisi – the most Jerusalem-centric Karaite of them all – also believed that the local new moon is what mattered. Check out my correspondence with a professor about this point. [1]

[1] If you are an expert on Kumisi or the views and reasoning of the historical Karaite sages on this point, please chime in or shoot me a note. And, more importantly, if you know of a biblical verse that addresses the issue of which moon we should be looking at, please let me know.

[2] To be clear, I am not suggesting that the local moon is an imperfect accommodation for those who are not in Israel. I am suggesting that it might actually be the correct halakha to base your observance on the local moon.  For example, if you live in Israel but are traveling for an extended period of time, under the theory proposed here, you would observe your holidays in accordance with the moon at the place of your travels.