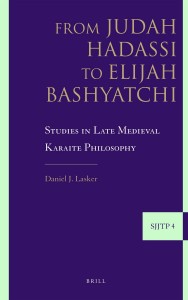 According to Professor Daniel Lasker, Judah Hadassi was “the last representative of classical” Karaite thought of the Jerusalem-based Mourners of Zion. [1.] And many Karaites are proud to assert that Hadassi penned Judaism’s first principles of faith.  This is likely not correct.

But, at least according to Professor Lasker, “the manner in which [Hadassi] arranged them [i.e., the articles of faith] was a novelty in Jewish thought.” [3.] In addition to the manner in which Hadassi set forth his principles, Hadassi’s principles differed from Saadia’s and Maimonides in that only Hadassi’s principles emphasized the importance of learning the language of the Torah and the significance of the Temple. So there you have it: Karaites contribute to novelty in Jewish thought. Chadesh Yameinu Kekedem!

So here’s Eli Shmuel discussing the first five principles of faith. You may recall that in his last video (on Shechita), Eli said that he would only eat meat slaughtered by religious Karaites who believe in these principles of faith.  And as professor Lasker notes, Eli is not alone:  “[Hadassi’s] principles of Judaism were particularly important to later Karaites, since a ritual slaughterer had to be knowledgeable of those principles in order for his meat to be considered fit for consumption.” [4.]

And here is a comparison of Judah Hadassi’s principles of faith with Maimonides’.

9 Responses to Did a Karaite Invent the Concept of Principles of Faith?