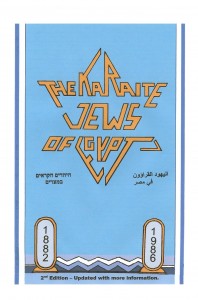 I’ve made several confessions on the blog. I’ve admitted that I lied to a rabbi. I’ve acknowledged that I support the Rabbanut. I’ve told you that shawarma is unbelievably good (even though it is almost never kosher). And now I’m going to make the biggest confession of them all.

I was once a Neo-Karaite. And I don’t mean the good kind.

When I was a Neo-Karaite, I was guilty of many things, including being a jerk and exhibiting a complete lack of humility.

In college, I was rediscovering my Karaite Jewish identity. And every Friday before Shabbat, I would email my friends and family about something new (and in my opinion truly awesome) I had recently learned about why the Karaites were right and the Rabbanites were wrong.

This continued for weeks until one of my college classmates (a Jewish girl I had met in Hebrew class), sent me a very direct email.  In essence, she asked me why I was so angry.  Well, not in essence, those were almost her exact words.

Until that moment, I had no clue that my zeal to spread the truth about Karaite Judaism was actually turning people off. It turns out that people like you and your message a lot less when your message is laced with sour grapes. It didn’t matter how much my friends and family loved me or agreed with Karaite Judaism. They didn’t want to join my cause, because they rightly could not stand being around me.

As a friend of mine pointed out recently, one of the main problems that Karaite Judaism faces is that people misunderstand the fundamental tenet of Karaite Judaism: “Search the Scripture well and do not rely on my opinion.” These words are not intended to promote anarchy or irreverence. Nor are they intended to reject outright the commentary or opinion of man.

The fundamental tenet of Karaite Judaism is an admission of humility, an understanding that we do not have all the answers. Even the most Karaite Karaite of them all, Daniel al-Kumisi, who famously proclaimed “[a]ccept nothing from any man,”[1] wrote several commentaries on the Tanakh. So he clearly was not advocating that people refrain from reading the opinion of man. And underscoring the importance of being humble, after zealously advocating his position, Kumisi told his readers to look at the Scripture to reach their own conclusions.

Until late last week, when my friend pointed it out to me, I never had realized that the humility expressed in the Karaite approach was a value deeply rooted in the Tanakh: “Don’t be wise in your own eyes. Fear YHWH, and depart from evil.” (Proverbs 3:7.)

All observant Jews seek to give honor to Hashem. And Karaite Jews seek to do this through the framework of our fundamental tenet. But as we do so,  all Karaite Jews (both historical and new) must actively promote a welcoming and humble environment. I admit this is not easy. But I trust we are all up to the challenge.

[1] See Leon Nemoy, The Pseudo-Qumisian Sermon to the Karaites, Proceedings of the American Academy for Jewish Research, Vol. 43 (1976) p. 56.

20 Responses to My Neo-Karaite Confession