The Best (and only) Purim Party in Town 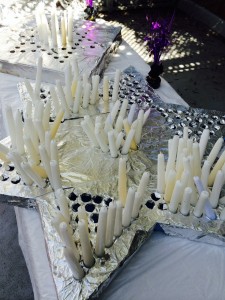 Prepping for Purim, the Festival of Lights.
http://wp.me/p43Sek-du

I won $10 yesterday at the Karaite Jews of America’s Purim party. My dad said that he thought it was one of the congregation’s biggest turnouts in years.

I think that God was rewarding me and the KJA for celebrating Purim at the appropriate time, in the 12th month. My dad laughs when I say things like this.

Setting aside my tongue-in-cheekedness, I do think it is awesome that the Karaite Jews of America celebrated Purim now (during the 12th month, when the Book of Esther tells us the events occurred) as opposed to next month (which would coincide with the Rabbanite Purim).

For more info on why the Karaite Jews of America’s Purim party was yesterday, I’ve copied below the statement sent by the KJA to its list-serv regarding the timing of Purim 2014. (DISCLOSURE: I helped draft the statement, and I believe it captures most of the nuances.  A Blue Thread is not affiliated with the Karaite Jews of America, and the views of A Blue Thread are not those of the KJA . . . yada yada yada.)

Dear Members of the KJA,

As Karaites, we are used to having our holidays fall on different days from our Rabbinic brethren.  Usually, our holidays only differ by a few days, due to the fact that the Karaite/Biblical Calendar sets its holidays based on the sighting of the new moon (whereas the Rabbinic Calendar is a “fixed” calendar that is intended to approximate the new moon sightings).

The Book of Esther specifically tells us that events of Purim occurred in the Twelfth Month, which was referred to as the month of Adar.  (Esther 9:1)  And as Karaites, we have proudly maintained the tradition of celebrating Purim in the 12th Month, in the month of Adar.  This year, Karaites and Rabbanites are actually in agreement that the date the Karaites are celebrating Purim will be in the twelfth month since the biblical new year.  (The biblical new year is in the spring and is the month in which Passover occurs.)

The reason that the Rabbanites are celebrating Purim a month after the Karaites is related to a nuance with respect to the Rabbinic calendar.  I need to back up a little bit to explain this concept.  The Tanakh does not “fix” the total number of months in a year.  There are either 12 months or 13 months, depending on the agricultural conditions in Israel.  During the Twelfth Month, the Jews would inspect the ripeness of the barley crops in the Land of Israel.  If the crops did not yet reach a certain stage of ripeness, we would add an extra biblical month (i.e., a thirteenth month) to the end of the calendar.  People call this extra month a leap month.  And Karaites of the middle ages (and even some today) proudly searched the Land of Israel to see if the barley had reached an appropriate stage of ripeness.

The concept of a leap month might seem odd to the western mind.  A leap month is somewhat analogous to the leap year in the Gregorian Calendar, which adds an extra day (“February 29th”) every four years in order to keep the secular calendar in line with the agricultural seasons.

11 Responses to The Best (and only) Purim Party in Town