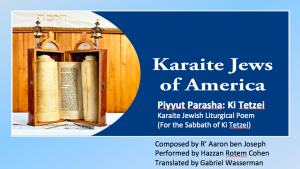 Today we ask two simple questions: Does God’s mercy extend to the bird’s nest? And if so, can we acknowledge this in prayer? Right away, my observant (and studied) Rabbanite readers know exactly where this is going. For everyone else, let me start at the beginning.

This year over Labor Day weekend, Jews will be reading Parashat Ki Tetzei, which contains a commandment called “shiluah hakan”. The commandment states that when we encounter a bird’s nest on our path, we cannot take the mother and her eggs (or young children) with her. We must shoo away the mother, before taking the eggs.

Last year, I was in the midst of putting together some learning for the Karaite Jews of America’s 2016 Shabbaton – and at the same time I was proposing to the KJA the idea of doing a set of translations and analyses of the poems of R’ Aaron ben Joseph, who wrote for each of the Torah portions. The Torah portion for that Shabbaton was Ki Tetzei. And I asked Dr. Gabriel Wasserman, who had previously worked on Royal Attire and has since worked on The Palanquin, to do a translation of R’ Aaron ben Joseph’s poem for Ki Tetzei. Gabriel has a PhD in Hebrew poetry, making him the perfect person to work on this book. [1.]

I looked at his initial draft and I was blown away. You see, I had known that R’ Aaron ben Joseph was very familiar with rabbinic literature. In fact, in a previous post, I discussed how R’ Aaron, a Karaite, wrote a poem for Lekh Lekha in which he references the Rabbinic midrash. So, I actually did not know what to expect when I received the draft translation and analysis for Ki Tetzei.

As I scanned the analysis, my eyes immediately fell upon one of Gabriel’s footnote to one of the lines of the poem. The line of poetry reads as follows:

Gabriel’s note on this reads (in relevant part) as follows:

Look at that: the same Karaite poet who freely incorporates Rabbanite texts in neutral or positive light is also polemicizing the Rabbanites. To be clear, I have since scanned Gabriel’s notes to all 700 or so lines of R’ Aaron’s parasha poetry, and this is the only line that is a polemic (and as far as I can tell, the only line that would be unacceptable for an observant Rabbanite to say in prayer).

But why did R’ Aharan choose this spot – of all spots – to polemicize. The only reason I can deduce is that there is a general Rabbanite thought (as evidenced in Gabriel’s note above) that God’s laws should not be recast as laws of mercy. And there is a general Karaite thought that this particular law is based on mercy.

For example, R’ Aaron’s predecessor, Judah Hadassi, wrote in Eshkol Hakofer that this commandment was given “in His multitude of mercy” (“Berov Rahamav”). Both H’ Haddasi and R’ Aaron are from Byzantium, so it makes sense that their views are similar. But, as will be seen in The Karaite Press’s forthcoming publication of selected Judeo-Arabic works of Israel Maghribi, even Karaites living in Egypt and writing in Judeo-Arabic viewed this as a law of mercy. (More on this publication in a future posting.)

So, there you have it. I’d like your thoughts.

For those following along with my blog, let’s mark this as Exhibit 32 in why Karaite literature needs to be studied in more detail. And for those of you who are interested, yes, The Karaite Press will publish Gabriel’s entire translation and analysis of R’ Aaron ben Joseph’s poems for each Torah portion. My best guess is that it will be available for Shavuot 2018. It is an amazing journey through Rabbanite, Karaite and Biblical thought. In the meantime, you can hear recordings and see initial translations (with some analysis) here. And you can support The Karaite Press by purchasing works here.

[1.] Credit must also be given to Hazzan Eli Shemuel, who first conceived of this translation project and provided working translations (without analysis) to the community.

12 Responses to Reader Poll: Does God’s Mercy Extend to the Bird’s Nest?