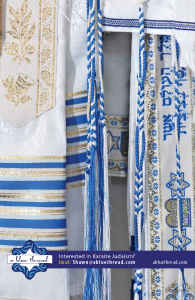 This is the basic framework that my friend suggested:

(i) Early Karaite Sages: These Sages (up till the 13th Century) were willing to engage meaningfully with the text and were willing to reach conclusions that differ from our Rabbanite brethren.

(ii) Late Karaite Sages: These Sages (13th Century up through the 15th century) were willing to engage meaningfully with the text but were not as willing to reach conclusions that differ from our Rabbanite brethren.

Let’s see how this plays out with respect to women and blue fringes.

The Torah says: “Speak to the Children of Israel (“bene Yisrael”), and say to them, that they shall make themselves tassels (sisiyot) on the corners of their garments throughout their generations; and place on the tassels of each corner a blue thread.” Numbers 15:38. The Torah continues and tells us the purpose of the commandment: “and you shall see it and you shall remember the all the mitzvoth of Hashem and you shall do them.”

(i) The Early Karaite Sages:

And the message [in Scripture] is that the reason for wearing [tzitzit] is what was said ‘and you shall remember all the mitzvoth of Hashem and do them’; it comes out of this that everyone, women and men, are obligated in [tzizit], since everyone is required to remember the mitzvoth of Hashem and do them, and this is in contrast to he who argues that only men, and not women, are obligated in this. (See Kitab Al Anwar wal maraqib XII.42.4.Volume 5)

As far as I can tell, the majority of the Late Karaite Sages held that women were not obligated to wear fringes. In fact, I do not know any Karaite Sages from this period who held that women were obligated. But again, their precise ruling is not important, let’s look at their reasoning. They generally interpreted the words “Bene Israel” to mean the “Sons of Israel.” They are also doing a policy analysis of the commandment, and determine that the commandment applies only to “adult men, […] who are concerned about the reward for [fulling the commandments].”

Regardless of whether I (or any Karaite agrees with their reasoning), they are at least engaging in the same types of analysis as the earlier stages.  The following is an excerpt from Royal Attire: On Karaite and Rabbanite Beliefs. 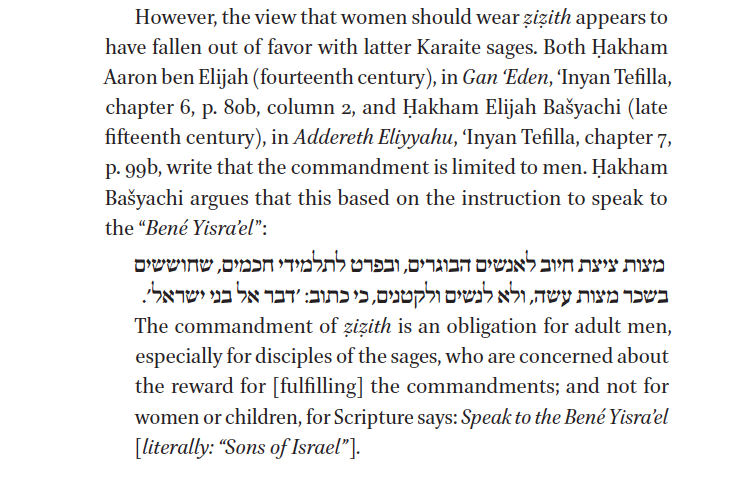 As far as I can tell, the Very Late Karaite Sages (not to be confused with the modern Karaite Sages) all held, like the Late Karaite Sages, that women were not obligated to wear blue fringes. The Karaite Jews of America is publishing an abbreviated version of Sefer Appiryon by H’ Solomon ben Aaron of Troki. The book is a fascinating read, and perhaps I will do a post on it at some point. What is troubling, though, is that he replaced textual analysis with a cursory reference to “tradition”: “From tradition, we know that this commandment is for men, and not for women.”

To be fair, he is not writing a halakhic work, but rather an explanatory work, so of course he is not going into detail on all these issues. But it is striking that he believes we know that women are excluded from the commandment based on tradition and not based on any textual source.

Of course, in order to prove that the later Karaite sages were simply documenting existing practices, I would need to provide many more sources. I have read excerpts from the Egyptian Karaite sources of the 19th and 20th Century. This “explanation” theory holds for most of those sources as well.

Although, I have argued the methodology is more important than the result, I am interested to know which sages you believe got it right:

[1.] Until Karaite literature is more widely available, it is hard for me to truly characterize what the majority and minority views are. For example, I would like to see what H’ Nahawendi felt about this issue (since he tended to disagree with other Karaites on matters concerning women); and that leaves open the question as to whether Nahawendi himself was a karaite

15 Responses to Women on the Fringes: Which Karaite Sages got it Right? (Reader Poll)