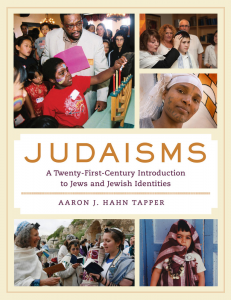 Let me give you some examples of questions I often receive as a Karaite:

While these questions are innocuous in and of themselves, they all reflect a Rabbanite bias. I get it. The entire Jewish world operates within the majority paradigm. But this Rabbanite Privilege means that 99% of Jews never have to worry about this aspect of their Jewish identity and how they fit in.

A few months back, I spoke to Professor Aaron J. Hahn-Tapper’s University of San Francisco class on Judaism. I found myself focusing on matters of Jewish identity, and the fact that every day I have to think about what it means to be a minority of a minority.

In Professor Hahn-Tapper’s excellent book, he places Karaites in the section called “Borders” – and he challenges his readers to ponder whether a group who does not accept Rabbinic Authority can be Jewish. As I mentioned to Professor Hahn-Tapper’s class, “Today, Karaites are rightly placed on the border of the Jewish box – when you consider that Karaites are a super minority and doing things differently from most of the Jews we see in the world.”

But as I also mentioned to his class, “Why are Karaites on the border? We believe in God, we accept the entire Tanakh. Why isn’t the reform movement on the border? Many Reform Jews do not believe in God. Why isn’t reconstructionist on the border? Many Reconstructionist Jews place contemporary norms over biblical norms.” I went on to explain – as I am now, that I have not animosity toward any of these Jewish movements. And I am not challenging their beliefs. I just raise the example to re-orient people’s frame of reference.

This reminds me of an episode form 1000 years ago. The Karaite Sage Jacob al-Qirqisani asked why the Rabbanite Jews of his day would not marry the Karaites, but would marry the Issawites, followers of a Jewish messinic figure. The reason Jacob al Qirqisini was telling: “Because [the Issawites] do not disagree with us over the festivals.”

Kirkisani interpreted the response to mean that the Rabbanites “regard open apostasy [i.e., the Issawite adherence to a messianic leader] more favorably than disagreement [by the Karaites] over a festival of [the Rabbanites’] own invention.”

So, even as Karaites were starting to increase in popularity, Rabbanite Privilege was so strong that the Rabbanites would have rather interacted with a messianic group that adhered to the Rabbinic festivals than with Karaites.

But as the title to Professor Hahn-Tapper’s book suggests, perhaps today it is best to think of Judaisms – and not a single Judaism.

Maybe the concept of sects and movements and denominations is a thing of the past.

Maybe I should stop worrying about Karaites and Rabbanites and just promote Karaite Judaism as one of the options related to the various Judaisms out there.

I would love to. But I can’t. I don’t have the privilege to do that: I have 35 emails in my inbox asking me to explain (and sometimes even “defend”) the Karaite approach to this or that.

BTW, there is a Rabbinic custom, which many Karaites have adopted, of not ending a Torah or  Haftarah portion on a negative note. So I won’t end this post on a negative note. Instead, I want to reflect on the fact that many of these historical divisions *are* a thing of the past. I learn weekly with an orthodox rabbi affiliated with Agudath Israel and I study with Chabad. These types of interactions between the Orthodox Jews and Karaite Jews were almost unheard of in previous years.

16 Responses to Rabbanite Privilege & The Struggle of Other Judaisms