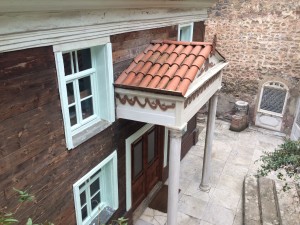 I am aiming to put together a book that helps people think like a Karaite Jew; so each week I will be answering one question an posting the information exclusively at the Karaite Jews of America’s site.[1] Of course, I may post the questions on A Blue Thread once in a while to remind you about the project. You can access the full lists of questions and answers here.

How do we know how to properly slaughter an animal so that it is fit for consumption, when the Torah does not describe slaughter in any detail?

It is true that the Torah does not describe how to slaughter an animal; but every historical Jewish community (as far as I am aware) slaughtered animals by slitting the front of the neck. Is this simply coincidence? Is this because God gave an “oral law” explaining how to slaughter? Or is something else going on?

From a Scriptural point of view, the word shechitah (“ritual slaughter”) is not expressly defined. Yet, it is clear from the Scripture that the Israelites knew how to slaughter long before the Torah was given. For example, we are all familiar with the events of Joseph’s childhood, in which his brothers tried to convince their father that Joseph died. In order to enhance their deception, they slaughtered a goat and put the goat’s blood on Joseph’s coat. See Genesis 37:31. Significantly for present purposes, the Torah describes the act of slaughtering the goat as “vayishchatu” (literally, “they slaughtered”; from the same root as “shechitah”). These events occurred before the Torah was given in the desert. Thus, God did not need to expressly detail in the Torah how to slaughter, because the practice was already known before the revelation.

This raises another question, though: how do we know that shechitah means to kill by slitting the neck as opposed to another method of killing? From a linguistic point of view, we can actually use the Tanakh to retrace what is likely the likely original meaning of the word shechitah. There is a verse in Jeremiah that reads as follows: “Their tongue is a murderous arrow, speaking deceit.”[2]  See Jeremiah 9:7. The word translated here as “murderous” is shachut, from the same linguistic root as shechitah. So, what is the connection between a murderous arrow (Hebrew: chetz shachut) and the act of slaughtering? The answer appears to be related to how an arrow becomes murderous. An arrow is deployed by pulling it back against a bow, much in the same way that a knife is pulled back for the purpose of slaughtering.

So far, we have shown that shechitah was known before the giving of the Torah – so God did not need to describe how it is done – and that the linguistic definition of shechitah seems to support the historical practice of all Jews. But it will not always be the case that the Biblical evidence lines up so cleanly.

In such cases, we are forced to rely on the tradition that has been passed down to us. Here, we can take some comfort in the fact that every historical Jewish movement performs slaughter in a very similar way. We can take even more comfort that the tradition appears to be consistent with the linguistic meaning of shechitah. The Karaites and Rabbanites might disagree about the particulars of the act of slaughtering; but there is no disagreement about the essentials of the act: namely, that it involves slitting an animal’s neck so that the blood spills out.

[And here is an example of some of the follow-up questions the final project will include.]

Are you convinced that the word shechitah means to kill by the neck? Recall the verse in Jeremiah 9:7: “Their tongue is a murderous arrow, speaking deceit.” To play devil’s advocate, what if I reframed the discussion regarding the “murderous arrow” in Jeremiah as follows: the reason the arrow is called murderous is because it has been “shot out” or “fired” much in the same way that deceitful words are shot out of a mouth and inflict pain. And what if I further argued that the connection between a murderous arrow (Hebrew: chetz shachut) and shechitah is that shechitah is a stabbing motion much like an arrow shoots out and impales its victim.

Well, there have it. If you have a question you would like answered or have comments on an existing question or answer, please email Shawn directly (shawn@abluethread.com). Persons providing comments and questions will have no copyright or other ownership interest in the resulting work.

[1] The KJA is not paying me to produce this project, and I am not on the board of directors of the KJA. I have decided for now that the best place to host this information is at the KJA’s site, because I believe the KJA is currently the organization best positioned to build a cohesive Karaite Jewish movement.

[2] This verse is actually part of the traditional Karaite Jewish liturgy for Yom Kippur as part of our confession of sins.