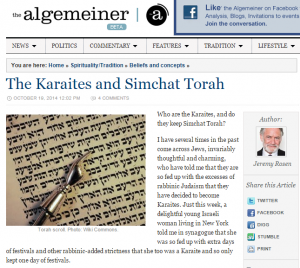 Rabbi Rosen relates that “just this week, a delightful young Israeli woman living in New York told me [i.e., Rabbi Rosen] in synagogue that she was so fed up with extra days of festivals and other rabbinic-added strictness that she too was a Karaite and so only kept one day of festivals.”

This is a rather unfortunate way to explain Karaism. Rabbi Rosen paints Karaites as a “protestant” group, which revolted against the Rabbinic authority. In doing so, he completely ignores the theological perspective of Karaite Judaism.

“Only” Accepting the Text of the Torah:

Rosen then (unfortunately) gives a wrong answer to his own question: “The Karaites take their name from the word for ‘text,’ which indicates that they only accept the text of the Torah.” 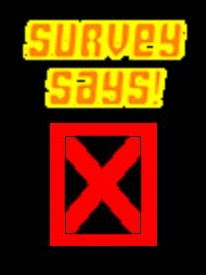 First, Karaites derive our laws from the entire Tanakh – yes the whole thing. In fact, a Karaite wrote the most perfect copy of the entire Tanakh. And the Karaite community of Egypt maintained the Cairo Codex of the Prophets – which shows that Karaites have an affinity for text beyond the Torah.

Second, Rosen states that Karaites “reject post-Torah rabbinic interpretations, additions and customs, and those theological ideas such as Resurrection and Life after Death that are not explicit in the Torah.”

Rabbi Rosen also tries to link (maybe, “defame”?) Karaites and Reform Jews by comparing our views of Jewish identity: “What makes them [i.e., Karaites] popular with Reform communities is that they accepted patrilineal lineal descent as the definition of Jewish identity.”

To be clear, any Jew who wants to have a meaningful Jewish interaction with our Creator and our people is okay in my book. So let me be the first to apologize to the Reform community for its getting dragged into Rosen’s anti-Karaite diatribe. You deserve better from our Jewish brethren. And so do we.

I am still waiting for someone to do a definitive article on this, but there is no doubt that the Persian Jewish community has had very strong Karaite-type tendencies and practices. As far as I can tell, these are sincerely held historical beliefs. And, again, as far as I can tell from speaking to Persian Jews, these practices cannot be explained away as a modern rebellion against Rabbinic Judaism. So it is not fair of Rosen to criticize his “little Persian community” as people who “do not bother with second days” of holidays.

Rosen also wondered why we celebrate Purim but not Hanukkah. One short answer is that Purim is in the Tanakh; whereas Hanukkah is not. A deeper answer is that most Karaites do not believe Purim to be a “required” holiday. Unlike our Rabbinic brethren, Karaites do not have mitzvoth attached to Purim. Under this view, Purim is simply a custom ingrained in our Jewish fabric.

As to Hanukkah, another reason Karaites tend not to celebrate it is because the story of the oil lasting for eight days is, well, not historical. Hanukkah, at its heart, celebrates the rededication of the Temple; but today the Temple is not standing. So a celebration of Hanukkah seems a little empty.

Simchat Torah (“The Rejoicing of the Torah”) is a different story altogether. The holiday celebrates the conclusion of our annual cycle of Torah readings, and thrusts back to the beginning of the Torah for our next annual cycle. This is a relatively recent Jewish holiday, even in the Rabbinic tradition, and as far as I can tell the holiday cannot reliably be dated prior to the middle ages.

But having said all that, Simchat Torah is a beautiful custom. I cannot think of any greater joy for the Jewish people than that of receiving God’s revelation through the Torah. And there is inherently nothing wrong with celebrating the end of the Torah cycle. Some of my greatest memories are of celebrating “Simchat Torah” as a young child.

I do not know a single Karaite today who believes that it is forbidden for us to follow customs (that otherwise do not violate the Torah). Karaites object to turning customs into commandments and placing greater importance on our customs than on God’s laws. (See Isaiah 29:13.)

What Rosen Got Mostly Right:

Rosen is correct that Karaites do not wear tefillen and do not believe that mezuzot are required. He is correct that we do not wave the “four species” on Sukkot – rather we are to use the items to build our sukkah. He is also right that Karaite shechita (or ritual slaughter) is more strict than Rabbinic shechita. For example Karaites historically have not permitted slaughtering pregnant animals; whereas the Rabbinic halacha permits this. Eli Shemuel did a video on Karaite shechita.

But Rabbanites probably did not go far enough. For example, Leviticus 18:12 forbids a man from sleeping with his aunt. Karaites have historically inferred from this that an uncle is also forbidden from sleeping with is niece. This makes sense because the relationship between an aunt and her nephew is (structurally) the same as that between a niece and her uncle. But in the Rabbinic tradition a man is *encouraged* to marry his niece.

At the end of the day, I wholeheartedly endorse Rabbi Rosen’s most important thesis: we need to be Jewish with all of our heart. We cannot practice Judaism as matter of convenience. If a Jew’s adherence to any form of Judaism is based solely on leniency – that person will stop being Jewish (of whatever denomination) as soon as it becomes inconvenient.

So may we all search for the truth and adhere to our values, regardless of how inconvenient that truth is. And, yes, Rabbi Rosen, may we all rejoice with the Torah – this year and every year.

11 Responses to Why Rabbi Rosen at the algemeiner is (Mostly) Wrong about Karaite, Persian and Reform Jews