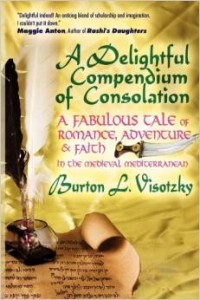 Unlike the last historical fiction I reviewed, A Delightful Compendium is remarkably accurate with respect to Karaite halakha and the relationship between Karaites and Rabbanites. The book is a series of letters among the Karaite family and between them and Rabbi Nissim ben Jacob, a historical Rabbanite Gaon from the 11th Century. Rabbi Nissim once headed the Rabbanite yeshiva in Kairawan, Tunisia.

[1]  What drove your interest in writing the book?

First, I was an English major in college and have always wanted to write a novel. Second, I wanted to tell the story of a rabbinic story-teller. Third, I did not read Arabic at the time I first drafted the novel (I have learned since), so I did not feel it appropriate to write a work of scholarship on the topic. Fourth, I live in New York City – everybody here believes we have one novel inside us waiting to get out. I suppose if I lived in LA I might have written a screenplay about Rabbanites and Karaites.

[2]  Did you learn anything new about Karaites and their halakha while researching the book?

I learned an enormous amount about Karaites while writing, but had already garnered a great deal much earlier when doing a scholarly edition of the Midrash on Proverbs, which contains some anti-Karaite polemic.

[3]  What is your favorite part of the book?

Asking what is my favorite part of the book is like asking which of my children I love more. I love all parts of the book, each in its own way. It is a funny thing how someone falls in love with their own writing. It’s a dangerous thing, too! I am grateful to have had a very good (and very strong) editor.

[My Favorite Part – SMALL SPOILER ALERT:  There is a rather interesting scene on erev Shabbat in which Karima pours blood into her lap to simulate menstruation. For her plan to work, she needed someone to see the blood. And she notes that her plan would not have succeeded if she were in a Karaite home – i.e., a home without any Sabbath lighting.]

[4] The main Rabbanite character is Rav Nissim Gaon (or Rav Nissim ben Jacob).  Why did you choose him as a central character in the work?

Rabbenu Nissim was fascinating to me in that he was a very well-known halachic authority and yet found time to make a compendium of rabbinic tales (aggada). This aspect is what captured my fancy. When my wife and I were on vacation once in Tunisia we visited Kairawan, and that settled the matter!

[5]  If readers wanted to learn more about Middle Eastern Jewish life in the Middle Ages, what books/resources would you recommend to them?

The best thing to read is the multi-volume work by Shlomo Dov Goitein, A MEDITERRANEAN SOCIETY. Virtually every page is fascinating and his scholarship is prodigious.

[My Note: I have since purchased a copy of this multi-volume set in an abridged single volume book.]

[6] What can Jews today learn from the Jewish diversity of the Middle Ages?

We must learn to perform the commandment to “love our neighbor as ourselves” every moment of every day.

While A Delightful Compendium is fiction, it is rooted in history and remarkably accurate in its portrayals of Karaite-Rabbanite relations. For those individuals interesting in learning some of the history behind the events, I provide this Compendium.  In the historical notes, I provide sources and or links to my previous posts.

Warning: Do not be misled by the Historical Notes; because the book is fiction the characters – even if they are inspired by real characters – may take different courses from their historical counterparts.

*All references to Heresy are to Dr. Marina Rustow’s Heresy and the Politics of Community.

One Response to Book Review & Interview: A Delightful Compendium by Rabbi Burton Visotzky