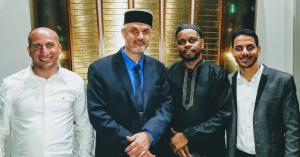 As background, it is fair to say that James Walker (Ya’aqov ben Avraham HaDani) knows Tanakh pretty well, as evidenced by his phenomenal performance in the Hebrew Tanakh competition. He also has translated, Esther Explained, for The Karaite Press, and led a learning on blue fringes for my learning series. (I promise, I’ll get back to doing more learnings soon.) So, he is the perfect person to translate a book on insights on living by the Tanakh. BTW, he also is involved in a local Rabbanite synagogue and is also a Mesharet (assistant leader) of the Hebrew Family of Charlotte (a historically Black congregation founded in the 1960s).

Before we get started talking about the work, I want to point out that James spent August 17-19 with us in Daly City and was the hazzan for the Friday evening service at the Karaite Jews of America. He was so good that a local congregant exclaimed, “My God . . . what a pleasure to listen to him.” Eli Shemuel, the President of the Karaite Community in Israel, said that James sounded like someone who has been the hazzan for 200 services not one making his debut.

In honor of James’s Hazzanut, the KJA is selling copies of The Sayings of Moshe for $14 for the next two weeks.

So, I will start with a question regarding his experience on hazzanut and our rededication weekend.

One Response to The Sayings of Moshe: A Revelation in Karaite Thought