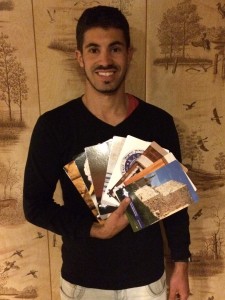 Eli Shmuel, a shaliach (of sorts) from the Karaite community of Israel, will be traveling the United States for several months, and he has some very ambitious goals while he is here.  I caught up with Eli last night upon his arrival to San Francisco.

Eli actually comes from a very interesting Karaite family. His father Magdi Shmuel is a Hakham in the Karaite Community of Israel and is very active in issues regarding the new moon. And as described in Hadassah Magazine, in 1954, when Egypt discovered an Israeli spy ring, Yacoub Shamuel (Eli’s great uncle) and his wife personally met with Egyptian President (dictator?) Gamal Abdel Nasser, to request (ultimately unsuccessfully) that Nasser spare the life of Moshe Marzouk. Marzouk was a Karaite Jew convicted of spying for Israel, and was hanged on January 31, 1955.[1]

Eli says that his main objectives in the United States are to help engage those who are not yet fully in the Karaite fold. He recognizes that difficult challenges await him in this regard, but he is ready to overcome them. Eli also wants to continue to produce educational videos on Karaite Judaism (similar to his video on Shechita/Ritual Slaughter). In fact, Eli is planning to do a presentation for the Karaite Jews of America on the state of the Karaite community in Israel. The KJA plans to record the talk and put it up on YouTube.

Eli has never been to the United States before, but he has heard many wonderful things about the Jewish community (Karaite, Rabbanite, and secular) here. And as to the American Karaite Jewish community, Eli says that he is incredibly grateful for the warmth that its members have shown him. Eli’s brother currently lives in the United States, has visited the Karaite synagogue in Daly City and has told Eli that the community is filled with many warm people who will receive Eli with great pleasure.

Eli sends a special thank you to all who have opened their hearts and homes to him thus far. If you would like to arrange for Eli to visit your Jewish community, please drop me a note at shawn@abluethread.com, and I’ll pass the request on to the appropriate people.