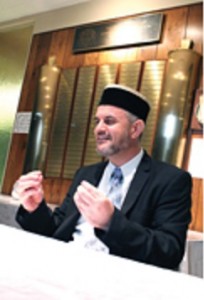 Let me begin with my usual disclaimers: I’m not a Rabbanite Jew. I don’t really take sides in the internal debates within the Rabbinic community. But, given the recent attention on the Open Orthodoxy Movement and its fervent desire to ordain female rabbis within the Orthodox Community – as well as the strong opposition by others who will not accept female rabbis, I thought I’d chime in with some Karaite thoughts.

I’ll start with the obvious place for a Karaite to begin. There is nothing in the Torah that forbids a woman from being a communal leader of the sort that rabbis fulfill today. If someone has a proof to the contrary, I invite you to post it in the comments. In the Torah, we even read of a female prophet (Miriam). In the rest of the NaKh we read of other female prophets, and a female judges and female military leaders.

In that regard, the current Chief Hakham of the Karaite Jewish community in Israel, Hakham Moshe Firrouz, recently stated that he yearns for the day that women are members of the Karaite Council of Sages, because he recognizes that women have different and equally valuable insights on the Torah. Here is an excerpt from a recent interview with the J of Northern California*:

“What about women, I asked — can they become Karaite rabbis? [Hakham Firrouz responded], ‘Certainly . . . It’s important that a woman be involved in the decisions of the Sages, because she sees things differently than a man.’”

The yeah, buts have a point, but not (in my opinion) a strong one.

You see, I have asked at least eight orthodox Rabbis to point me to any source – Scriptural or Rabbinic – that shows a women is halakhically forbidden from being a Rabbi. No one has given me a single source.  Not one. Recently a rabbi affiliated with Agudath Israel told me that it is wrong to say that women are forbidden from being Rabbis. According to him, the most that could be said is that female rabbis are simply “not accepted.”  If you can point me to a binding halakhic ruling that women cannot be rabbis in the Rabbinic tradition, I invite you to post in the comments.

But the reason I think that Open Orthodoxy (regardless of which side of the debate you are on) is a positive step backward is because there actually was a female religious leader and teacher in the orthodox community about 400 years ago.  Her name was Asenath Barzani and she had mastery of Hebrew, Torah, Talmud, Midrash, and Kabbalah. She led a yeshiva in Kurdistan and she also provided men with rabbinic training. She did *not* have the title of rabbi – rather she was called Ta’anit.

And as I’ve mentioned previously, about 900 years ago, the Karaite community of Spain was led by a woman, who was called Al-Moallema, which literally means “the teacher.” One of the meanings of Rabbi is “teacher.”

We need more female religious teachers and leaders – both amongst Karaites and Rabbanites and all of the movements of the Children of Israel. And every time a women becomes a strong religious leader in the Jewish community, I personally will say chadesh yameinu kekedem (“renew our days as of old”) (Lamentations 5:21).

So, I love the fact that Open Orthodoxy is trying to create more female religious leaders who are educated in the Biblical and Rabbinic tradition. But I’ll leave to the Rabbinic community to decide what to call these leaders.

Filed under Moetzet Hachamim (Council of Sages), Women in Karaism

16 Responses to Open Orthodoxy is a Positive Step Backward