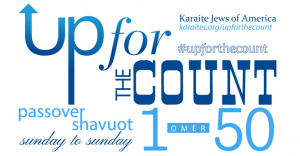 And now the best part. You can visit the site now for a sneak peek at the program: Up For The Count.

Here’s how the program works. The first day of the counting of the omer is Sunday, April 20, 2014. Sometime before that, the KJA will upload recordings of people counting the omer according to the traditional Karaite formulation using (in most cases) the traditional Egyptian Karaite melody. During each day of the counting of the omer, you can go and listen to the count. Or you can learn how to say (or sing) the count on your own.

The KJA has done remarkable work to get recordings from different and unique voices: women, children, old men, Israelis, Americans, and professional singers.

For example, on the Up For The Count site you can currently hear Rotem Cohen count the first day of the omer. Rotem made headlines in Israel by refusing to participate live on A Star is Born (Israel’s equivalent of American Idol) on the biblical Shavuot (i.e., the last day of the omer).

The KJA has also received commitment from Gal Tamir to record several days of the omer. Gal recently formally affiliated with the Karaite Jewish movement and has quite the impressive resume. He represented Israel in the Universong Contest in Tenerife, Spain (2006). And he actually won first place (for a duet) at the Festival de la Canción Latinoamericana of California (2006).

And to prove that you do not have to have a great voice to participate, I just might throw my hat into the ring. The KJA is still hoping that some of the other “famous” Karaites running around will lend their voices to the project.

Now if only someone could create an app that sets the counting of the omer as my alarm clock each morning . . .

The logo was designed by Jason Sutherland.