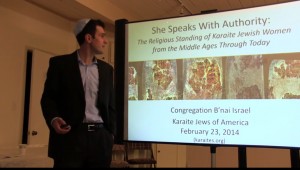 I haven’t been on this intense Karaite journey for too long; so I still get surprised by interesting facts on a regular basis. But during my recent talk on the religious standing of women in Karaite Judaism, I was surprised by what surprised me.

I didn’t even see it coming.

I had asked the crowd of about 50 people whether they thought women could perform shechita (ritual slaughter). The crowd, consisting mostly of Egyptian Karaites, nodded enthusiastically – as if to say “of course!”

I honestly thought I was going to surprise them by letting them know that a now-deceased Karaite woman used to perform shechita in Israel and that the mother (also deceased) of one of the members of the Karaite Jews of America performed shechita when the community was living in Egypt.

But this was apparently old news to them. By my quick count during the presentation, nine or ten attendees knew of a shochetet (female ritual slaughterer) in Egypt. And after the talk, I was able to deduce that these attendees were referring to at least seven different Karaite shochatot (plural of shochetet).

I was actually so surprised by the number of people who knew a shochetet that I forgot to mention the most important part during my presentation. There is at least one instance in the Tanach in which a woman killed meat for consumption. (See 1 Samuel 28:24.) Interestingly, despite this verse, the Karaites of the Middle Ages actually debated whether a woman can perform ritual slaughter – and my understanding is that the majority of the Karaites in the Middle Ages (puzzlingly) believed that a woman could not perform ritual slaughter. They were aware of this verse but (somehow) reached a different conclusion. Maybe Mikdash Me’at will cover that.

At some point, as I learned during the presentation, it became quite common for Karaite women to be shochatot. But I do not think there is a single Karaite shochetet living today. So it raises the question, will there ever be another one?

The unfortunate answer is that Karaite shochatot are likely gone for good, unless something drastic happens. In the US, Karaites have been westernized and in the west “ritual slaughterer” is (sadly) not a role that women generally take on. And in Israel, Karaites are fighting secularization and Rabbanization – neither of which is conducive to training shochatot. [1.]

While the Jewish world is currently focused on the role of women in Rabbinic Judaism, I hope that Karaites work to provide Jewish women with the opportunity to fulfill every biblically permissible communal role – including shochetet.

So if you are a Jewish woman who wants to learn shechita, drop me a note and I’ll put you in touch with some people who can help.

1. I do not know whether the Karaite community of Turkey has any shochatot. In the Rabbinic tradition women may be shochatot, but the general view seems to be that because women have not served as shochatot for many generations, they should no longer serve as shochatot.

Filed under Karaite Jews of America, Shechita, Women in Karaism